Happy Baby Signs  helps parents live with more joy by illuminating new ways to nurture, communicate, and connect with their children. We have been providing baby sign language classes since 2005 and have taught more than 15,000 parents how to sign with their babies. Our program is founded on more than four decades of evidence-based research and uses American Sign Language (ASL). We believe using ASL with the hearing population nourishes a more inclusive community. Our classes are a fun-filled way to teach parents how to introduce sign language into their baby's everyday routines through songs and interactive activities.

Teri Voorhes, former and highly esteemed Happy Baby Sign's program manager, has been signing with Happy Baby Signs for the last five years. She began using American Sign Language after her son Robert was born with Down Syndrome back in 1998.  She was advised to use this with Robert as a baby as his verbal speech would be delayed.  The first time Robert signed “more” “music” at his Early Intervention class she was hooked.  Robert has recently graduated High School and still uses ASL to finger spell words he can't enunciate.   He enjoys helping Mom practice and prepare for her classes.

Teri has continued her education in American Sign Language and has been teaching in her sons school since 2005.  She has had great success with spreading the magic of Sign Language through presentations at Ability Awareness Day, teaching songs to classes to perform at assemblies and general classroom instruction.  In 2011 Teri became an Advanced Signing Time Instructor and began teaching in an After School Program and Baby Sign classes throughout the community.  She has presented at many Special Needs conferences throughout the Bay Area.

Before the arrival of her two sons Teri enjoyed working as a Senior Manager of Store Technologies for Gap, Inc.  She also received her Professional Designation Certificate from Fashion Institute of Design and Merchandising in Los Angeles.

Teri is very excited to be a part of the Happy Baby Signs network of ASL Instructors and to reach out to as many parents and babies as possible sharing the power of Sign.

Courtney has a strong passion for American Sign Language because when she was young, she became hard-of-hearing for about 3 years. This gave her a glimpse of the deaf world at a young age, what it was like to communicate, and the passion to share and teach American Sign Language and Deaf Culture. Her aspirations include teaching sign language in 3rd world countries, doing work as a photojournalist, and bringing her creative product designs to market. Courtney is ambitious, organized, and loves to add her own creative style to her classes.

Other than teaching and tutoring students in American Sign Language, Courtney loves to travel, Swing dance, does a variety of martial arts, and loves dipping her feet into new and exciting activities.

She can’t wait to change the world, one sign at a time. 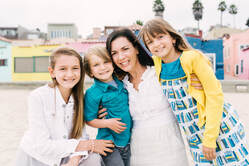 Erika Vetter fell in love with sign language in her childhood, when she befriended a Deaf girl in her Brownie Scout troop. This friendship continued for many years and led her to volunteer in the hard-of-hearing preschool during recess when she was still in elementary school.  Erika received her Bachelor of Science in Speech Pathology and Audiology with Teacher Certification at Elmira College.  She earned her Master's Degree as a Teacher for the Deaf for grades K-12 from Canisius College in upstate New York.  Erika has taught both Deaf and hearing children for the past 18 years in schools such as the Pennsylvania School for the Deaf and the California School for the Deaf in Fremont and currently works as an ASL interpreter and instructor.  Erika's thesis on teaching ASL to pre-verbal hearing children, along with her recent coursework in bilingual education, has reinforced her belief that signing with children can produce amazing results.  All three of her children started signing between six and seven months old and still sign on a daily basis.  Erika delights in seeing ​children empowered with a tremendous ability to communicate effectively at a very early age and is eager to share her experience and enthusiasm with you.

As a midwife, Morgan has a special interest in communicating with and understanding the needs of young children, especially those who are preverbal. After experiencing an Introduction to Baby Sign Language with Bill, Morgan was inspired to start studying American Sign Language at Berkeley City College. She loves learning about Deaf Culture and especially enjoys the new way she thinks about communication through the lens of a visual language.

Beyond catching babies, Morgan also teaches Childbirth Education to expectant families and facilitates a weekly Postpartum Social Group. In her spare time, you can find Morgan knitting, sewing, throwing clay on the wheel, gardening, hiking, and talking endlessly about pregnancy, birth, and women’s health. She looks forward to supporting families in discovering all the brilliant thoughts their babies are ready to communicate with them!

Robin grew up with an interest in American Sign Language and loved learning new signs from a couple of books, but never pursued formal ASL classes until after college. After finishing graduate school and searching for a job, she finally took her first ASL class. In the introductory chapter of that class' textbook, the various reasons for studying ASL were laid out and communicating with your baby was listed among the reasons. She filed that away in her brain as an interesting reason, wanting to remember this for when she and her husband did eventually have children. Little did she know their daughter would be born with genetic hearing loss. As soon as their daughter was diagnosed as a newborn, Robin and her husband knew that ASL would absolutely become a big part of their lives. They took all the classes offered by Touch Blue Sky and started signing with their daughter. The response was incredible! Robin enjoys teaching and sharing knowledge with those around her who are passionate about learning, and wants to bring ASL to life for parents of little ones.